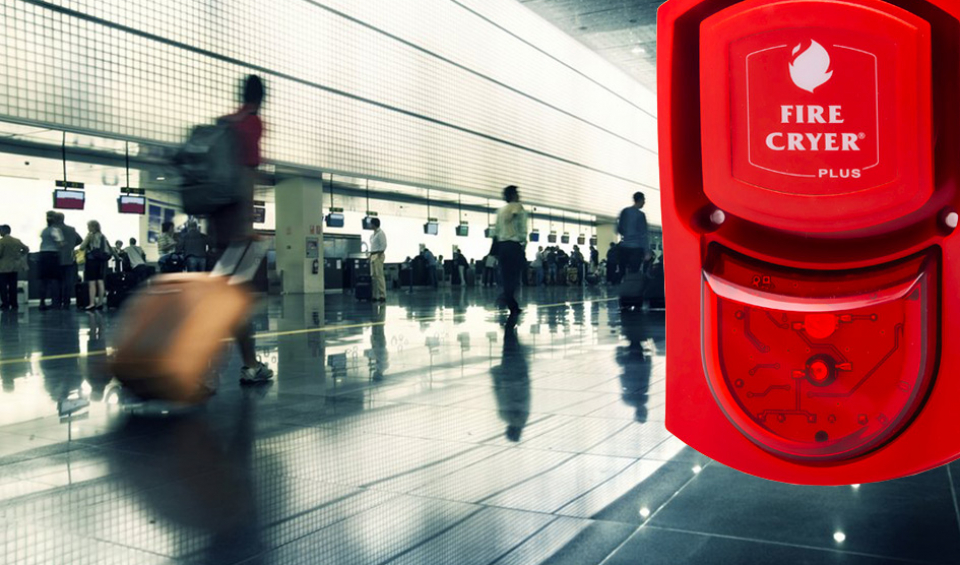 For facilities management, anticipating any large-scale evacuation is at the very forefront of the fire safety measures they must consider to underpin emergency planning. As one recent example where hundreds of people had to be evacuated from a building shows, planning for public address announcements is a safety-critical concern that demands attention to best practice offered by the latest audible warning systems.

With so many diﬀerent types of audible warning devices, it can be confusing to building occupants when an alarm sounds. Is it the ﬁre alarm? An emergency exit alarm? Or a public safety alert? To counter these conﬂicting responses, voice sounders are now an established and eﬀective contribution to voice evacuation systems in large public and commercial buildings, and can be a viable alternative to more complex VA (Voice Alarm) systems. While frankly outmoded ﬁre alarm systems based on bells have not yet been fully replaced, the concept of voice commands to instruct and direct people on how to leave a building or other area during an emergency is widely recognised as the most eﬃcient and sensible way to fulﬁl an important safety-critical function.

Behaviour in the event of ﬁre

Research has shown that voice alarm messages result in quicker reaction times than when sirens or bells are used, and has resulted in VA Systems becoming more commonplace as the primary means of evacuation in public buildings.

There is well documented research into people’s behaviour in the event of ﬁre. Most striking is the variation in the response to alarm signals:

- 13% of people react in a timely manner to bells

- 45% of people react to text information

- 75% of people react in a timely manner to voice messages

Further research shows that people’s behaviour varies dependent on the environment, and in an emergency they may exit the building using the same door they used to enter. The use of a clear voice message greatly increases response rate and provides the opportunity to advise occupants of the safest emergency route. 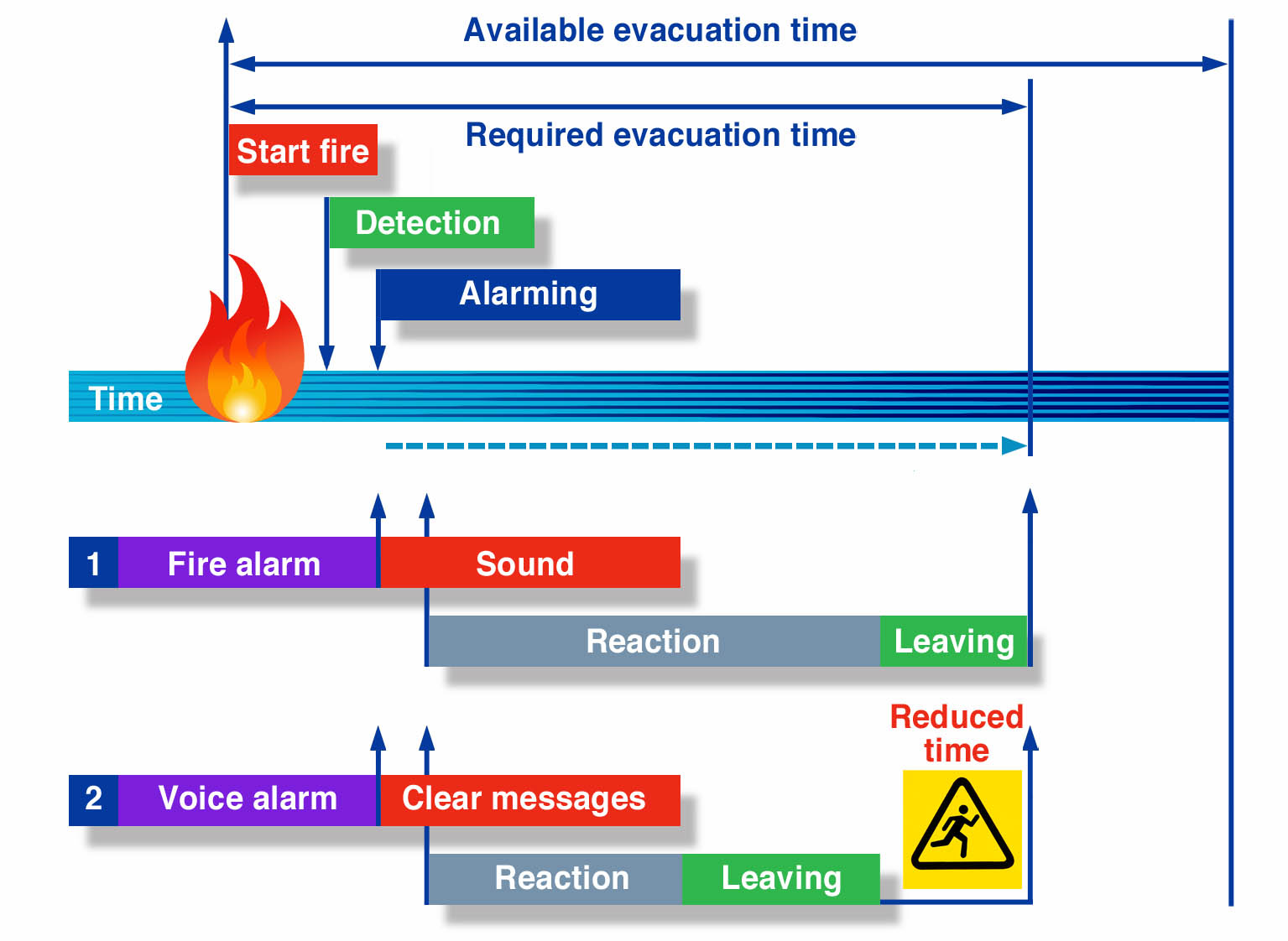 The psychology of voice-enabled emergency instructions

Behavioural science studies reveal that the persuasive power of a voiced announcement is reliant on the vocal characteristics and the perceived credibility of the speaker. Think of virtual assistants Siri, Alexa and Satnav (for most GPS navigation systems the default voice is female). It’s clear the sex of the announcer/instructor inﬂuences perceptions of credibility. So Alpha Male is not the popular choice while a female voice, steady and calm, is a norm. Similarly, for emergency alerting systems it’s shown that women’s voices are more persuasive, particularly when the announcement is a non-gendered issue.

James Jones, Managing Director of Vimpex, leading UK independent manufacturer and distributor of Fire Detection, Alarm and Evacuation products and accessories, has extensive experience of the analytics behind this issue of voice-based alerts to convey authority. ‘It is commonly accepted that the female voice is more appropriate for the vast majority of applications and in fact the female voice “carries” somewhat better in many environments. That’s why women’s voices in seven languages are available with our products. When first developing the Vimpex Fire-Cryer Voice Sounder ranges we looked at the difference between male and female voices and measured such aspects as instinctive reaction and empathetic acceptance.

‘Another important aspect is the behaviour of the female voice when used in sounder technology. The female voice is “purer” in that it actually has a narrower frequency range at the same Sound Pressure Level (SPL) that the male equivalent. This means that it is much more easily reproduced through the Fire-Cryer sounder and, for any given sound level, requires less current than a male voice.’

James also confirms that he has encountered no specification for voice sounders where a benefit is said to derive from male authority over female. Interestingly, even products supplied to national regions that are arguably more traditional and still patriarchal, the female voice has been deemed appropriate.

The message is clear

The trend towards the use of voice sounders as integral to automated fire system performance is growing. With multiple sounder circuit synchronisation, up to seven pre-recorded messages available, and with growing ranges of voice sounders constantly being introduced, the message is clear that voice sounders are intelligible, eﬀectively loud enough and can be easily integrated into both new and existing ﬁre alarm systems.

For example, the Fire-Cryer is a very versatile product, both able to be used as a drop-in replacement for basic tone sounders or as part of a sophisticated engineered solution. When specified as a multi-message system, the Fire-Cryer has been used extensively in shopping malls (Arndale Centres and Gun Wharf Quays), museums (Liverpool Maritime Museum), areas of mass transit (London Underground), Schools (for both fire, lock down and class change) and a raft of mixed use residential, retail and commercial spaces.

The ﬁrst task of any ﬁre alarm design is to agree the evacuation strategy and whether there is any requirement for staged or phased evacuation. Then the designer must ensure agreement with the client and the end user as to the choice of messages and preceding attention-drawing tones to be used in the system. The choice of messages is extensive and, with seven messages available in a single sounder, a ﬁre alarm system can be expanded to include inputs for bomb alerts, terrorist threats, coded warnings, water leakage alerts, class change announcements, system tests, ‘all clear’ announcements, machinery shut down warnings, health and safety reminders, general alert messages, and of course ‘ﬁre’ alarm messages. The potential is huge and with the trend for ﬁre evacuation systems to be used for general evacuation and public safety systems, the use of multi-message voice sounders is set to boom.

The Vimpex Fire-Cryer ranges of Voice Sounders, are good examples of how voice technology is proving to reduce delay and response rate in evacuation times. Fire-Cryer can be used as a single message 24 V conventional voice sounder on any sounder/notiﬁcation alarm circuit or as part of a sophisticated multi-message, multilingual evacuation system.

Established in 1994, Vimpex is the UK’s leading independent manufacturer and distributor of Fire Detection, Alarm and Evacuation products and accessories. The company produces and distributes a range of high quality Evacuation, Signalling and Building Infrastructure System products, both Vimpex-manufactured and supplied by our manufacturing partners.